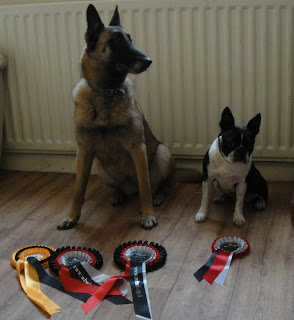 Friday 13th certainly lived up to its reputation as Ruby badly cut her paw when out for a walk. I noticed her limping and when I checked there was a lot of blood.
Unfortunately we were due to go to the Working Belgian Shepherd Society agility show that night and this meant she would not be able to compete.
Much to her disgust I decided to leave her at home and not even take her with us in the caravan as I know she would not rest if she was at an agility show, sore paw or no sore paw.

When we got to the show it was raining quite heavily but I managed to get the caravan set up without too many problems. Unfortunately the rain carried on to the following morning and I had to run the first couple of classes in the rain. daisy did really well in her first jumping class going clear. although a couple of handling errors by me meant our time wasn't fast enough for a place.

Saffy also had a very good day getting 2 clear rounds in jumping and agility and also coming fourth in her agility class. She was also best BSD in 3 of her classes.

Sunday was not quite so successful. Saffy ran two very nice agility rounds but just missed her A frame contact in both of them. A real shame as she was much faster than the winning dog so would have won if she had got them.

Daisy had a mad moment in her agility class and ran over to the pole picker and then the judgeto see if they would make a fuss of her. She loves people and finds it hard to ignore them. Hopefully as she gets more experienced she will learn to wait until she has finished her runs to speak to people.
Posted by Foxbriar No comments:

I am back from a lovely 9 days away staying in my caravan with the dogs. We went to the Adams Agility show, then stayed on the site until the Derbyshire Agility show the following weekend. Ruby did very well at both shows getting numerous clear rounds.

Finally Saffy has managed to get a couple of clear rounds too. One in a pay on the day class and one in a jumping class so she has actually got a point in her agility record book. Only 199 to go to get her Bronze agility warrant! 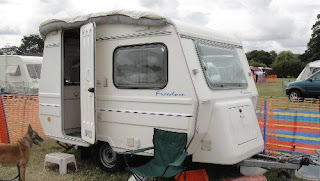 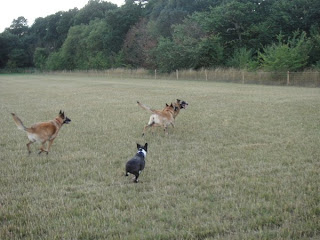 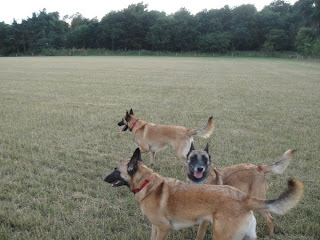 In the week there were some fun games to do and training too. Saffy did really well winning the tennis ball dunking game, getting 6 tennis balls out of a bucket of water in just 17 seconds. She also had a go at the the teddy bear rescue where they dogs had to retrieve teddies from a square. At first she seemed to think she was doing a scent exercise but then got the idea and brought them all back.

Lily entered her very first agility competition. A fun class consisting of just jumps and tunnels. We did the anysize class with low jumps and much to my surprise she won it. She was delighted with the squeaky toy that was her prize.
Daisy was entered in several classes and did really well getting mostly clear rounds, although she did disgrace herself in one class by running up to the pole picker and trying to get him to stroke her.

On Saturday as a break from agility we went along to the BSDA Championship show which was being held just down the road.
Lily came second in Junior which was very good as she is such a baby, only just out of puppy.
Ruby did really well winning Limit, and then went on to come second in the obedience. 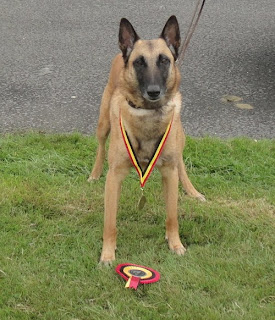 Unfortunately I made a mistake with the entries so Saffy wasn't entered in the obedience.
Posted by Foxbriar No comments: