second day at Dashin Dogs, Ruby was entered in 3 classes. She got a clear round in Grade 1 jumping and also in Grade 1-2 Agility. We did get eliminated in our other jumping class but that was totally my fault for giving the wrong signal by a jump so she back jumped it rather than going round it. I have managed to follow all the courses so far, only getting slightly lost on one course, but I am sure my handling skills will improve with experience.


We met up with lots of friends today. Janice was there with Nika and Chris with Fen. We also had a bit of a family get together as Jo and Nigel were there with Saffy's brother Cody and Laekenois half brother Pudsey, and also Ronnie who is related to Ruby and Casey. Keisha was also there and did really well getting two places in different classes.
Posted by Foxbriar No comments:

We went to Dashin Dogs, Ruby's first KC agility competition. We did two classes, first a helter skelter which was a small circle of Jumps then a larger one. Then a Jumping class. Ruby did really well getting a clear round in both classes. unfortunately she wasn't fast enough to get a place in either of them but she jumped really well, and did exactly what I asked. She really enjoyed it.

Saffy also came along and we did some training around the rings mainly working on Saffy watching the other dogs running fast without getting too over excited. She does get rather wound up by small dogs running fast, especially through tunnels.
Posted by Foxbriar No comments:

Newton Heath obedience show today. This is a nice show held in a lovely park with a river for the dogs to paddle in and loads of space to run. 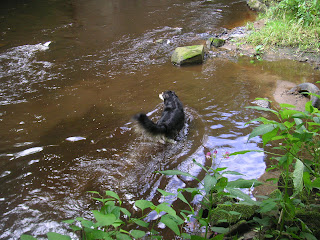 Dora was drawn first in beginners, usually she likes working early but today she was rather inattentive looking around in her heelwork. Her retrieve and recall were excellent.

I only did a training round with Saffy and Ruby but they both did some nice heelwork and played well with their toys in the ring. 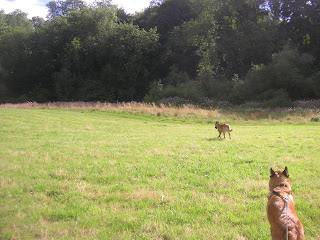 There was a special class for anything but a collie at this show which i netered both Ruby and Saffy in. It was based on an obedience round but the judge was looking for drive, enthusiasm and team work. We had to play with the dog up to the starting point, then put the toy away and go into heelwork in a circle, do a fast double about turn, run away from the dog and then back into heelwork. all to be fun rather than formal Saffy loved it and bounced along until we had to do an about turn near the send away which was set up with a toy at each corner. Saffy can resist anything except temptation and will steal anyone else's toys so she forgot all about heelwork and checked out all the toys chose one and then raced back to me much to the amusement of the judge and steward.
Next was a retrieve over a small hurdle. Again with extra points for enthusiasm. no formal present or finish. saffy was quite happy to jump the hurdle both ways. A lot of the dogs seemed to find this bit really difficult to understand and went round the hurdle.
When Ruby did it she preferred the hurdle to the retrieve. she hopped over the hurdle, then back and then over again, picked up the dumbell and jumped back again to me.
Then we had to do a recall with no formal present so as it usual Saffy shot towards me and crashed into my chest making me stagger backwards. i don't think she is very good for my back but she does enjoy herself. Ruby as always was much more delicate about the whole thing and trotted to me and gently leaned against me. 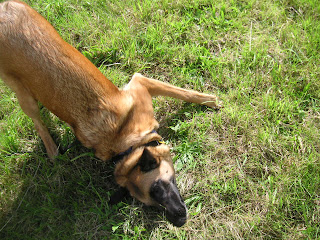 To my amazement Saffy scored very highly in this competition and it looked like she was going to get a place until a dog came a long at the end and pipped her at the post. She ended up seventh and as there were about 60 dogs entered in this class I was ever so pleased with her.
At lunch time I took the dogs for a walk but forgot that Dora's novice stays were at lunchtime and got back just as the finished so we didn't win any other classes. We had a very nice day though. 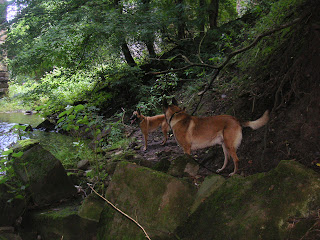 We went to a small agility competition tonight at a local club. I entered Ruby in two classes and Robin took Dora in one and then I took Saffy over the small jumps for a bit of experience.
Ruby did really well, it was me that had the problems. in spite of the fact that there were numbers by each jump I got lost on 3 of the four runs we did. Ruby jumped all the jumps clear and even did a full height dog walk twice. On our last run I managed to get the jumps in the right order and we actually got placed fifth with a clear round. ruby is really enjoying agility now.

I ran Saffy over the lower jumps but she was so excited to be off the lead and running around she took off for a few laps of the field, stopped to say hello to the pole picker then came back to see what I was doing. after that she did stay with me but of course she has only just started agility so is not as responsive to my cues as Ruby is so I cued jumps and sometimes she jumped them and sometimes didn't. She did enjoy herself though.

Robin had a go with Dora over the low jumps. They did very well as long as I kept out of sight but if she caught a glimpse of me she ran off th course to see what I was doing. they did have a good time though and dora was not the only dog of the night to run out of the ring.
To finish the night off we won a prize on the raffle.
Posted by Foxbriar No comments:

I went over to Jan's for the day for a get together with other puppy owners. I took Ruby and Saffy with me, and they had a good time playing with the other puppys. 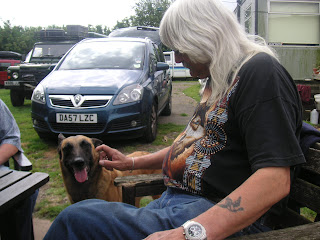 We got to meet some of the Laekenois puppys 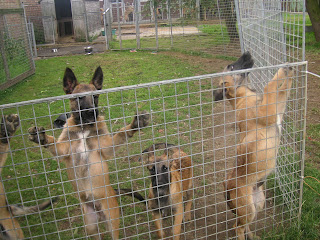 and Ruby found a rather nice ball to play with. 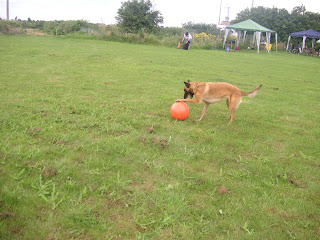 Today we went to the BSDA Championship Show It was held in a new Venue, a large country park in Dudley. It was a really nice place, lots of nice walks for the dogs.

the judge was Anne-Marie Been Sluyters a continental Malinois specialist. Casey went in the ring first and he was being handled by our friend Laura, who is a really good Junior Handler. He was placed first in the class and was graded excellent.

Then it was Saffy's turn in the puppy bitch class with Laura handling again. Saffy also was placed first ahead of both her sisters and was graded Very Promising, the highest grade a puppy can get. 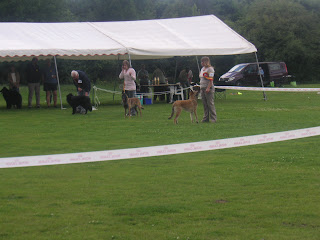 I took Ruby in the ring next as Laura had to go and handle another dog, but even with me handling Ruby was placed second and she was also graded excellent.
Luckily Laura was back in time for the best puppy in breed and expertly handled Saffy to best puppy in breed. 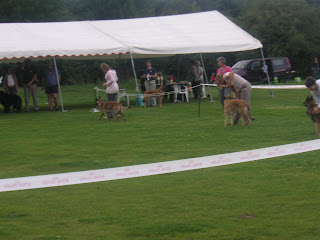 After the excitement of the breed judging I took Dora into the Obedience where we had entered Novice and A, the first time I had entered Dora in A.
We did the stays first and I wasn't sure whether Dora would manage the A sit stay as it is two minutes, but i needn't have worried, she did it fine, then she did the 3 minute out of site down stay and completed that successfully too.
Dora was a bit distracted doing her heelwork and the weather was very hot by then but overall i was pleased with it. then we had to do scent, again the first time she has done it in a competition, but she worked it very well and picked up the correct cloth and brought it back to me. We placed second in both Novice and A. 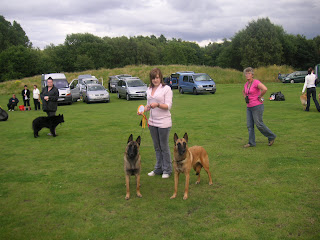