The Boston Babbies are now 6.5 weeks old. Very lively and into everything. I wanted to take pictures of them standing but that proved a lot more difficult than I expected as they just don't like to stand still.
We have had several people round to visit. It seems as if they know when we are expecting visitors as they run round and play and play until the visitors arrive and then fall asleep while the visitors are here then wake up once they go again

This is James who is now Theo 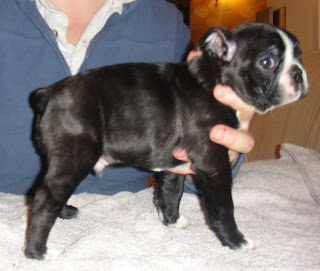 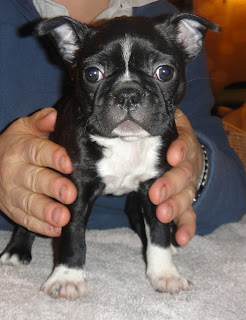 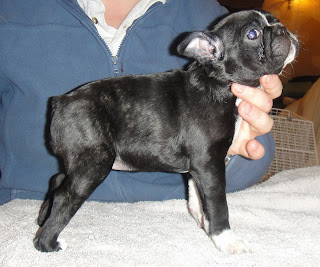 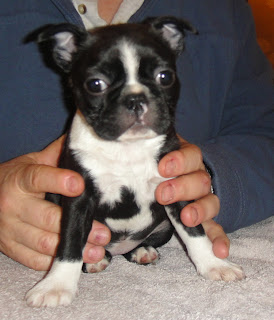 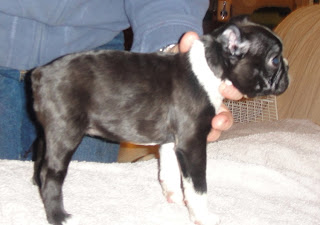 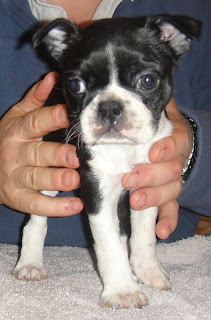 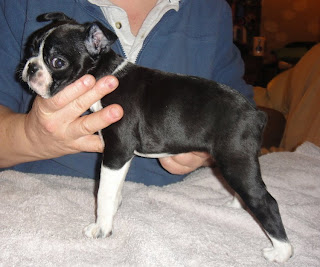 Today was Agility Addicts Show. The first one we have been to for absolutely ages and it was really nice to be back competing again. Unfortunately Lily is still in season so she had to stay at home so it was just Ruby and Milo, who was competing for the first time.
Ruby was first in the ring. It seemed to be quite a complicated jumping course and I wasn't sure how well we would do but Ruby surprised me and jumped clear. She did everything I asked and I was able to handle her exactly how I planned. Actually that is not really unusual with Ruby as she is always really good at following my cues, the problem is more often that I get it wrong and she does what I say. We got a clear round but were just outside the places.
Next was Milo's agility runs. He did really well. We did get eliminated but it was because I didn't make sure I got close enough to the tunnel to pick him up so he got a bit confused about which jump to do next. Once I got him back we carried on and everything went smoothly until we got to the sea-saw. He loves the contact equipment and in spite of me yelling sea-saw he shot straight up it and into space. Thankfully he landed well and the judge told me to put him back on it again to make sure he hadn't frightened himself too much. He went straight back on but much slower this time and did it properly. Although we were eliminated I was really pleased with how he ran. He went where I said most of the time and going over strange equipment didn't seem to bother him at all. On the next run we corrected the previous mistakes but did something else wrong so got eliminated again. He did do the sea-saw properly though.
Next was Ruby's agility runs and as we are still working on her dog walk phobia I decided to do them not for competition and just do a couple of jumps and then the dog walk and leave the ring. She was a little unsure but didn't get too stressed out about it. We will keep working on it and hopefully will get over it again.
Finally was Milo's jumping run and it was a very nice course with several changes of side but each one was at the tunnel which made it quite easy. His first run was fantastic, he did went exactly what I said and got a clear round. Not bad for his first ever competition. He was 6th but unfortunately the places only went to 5th, but I am still really pleased with him.
Milo was measured as well and I really was not sure if he would be small or medium. He is so close to the cut off point for small but luckily the measures decided he was just small enough to be small. I am glad about this as he is quite a stocky dog and he would struggle to jump the medium height jumps. I just have to hope he doesn't grow at all in the next year.
Posted by Foxbriar No comments:

The puppies are almost 5 weeks old now. They are full of life and really getting playful now. 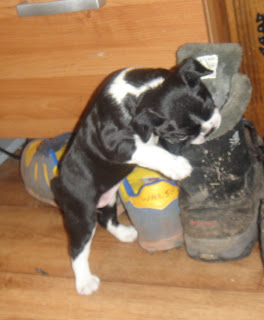 The weather is quite mild at the moment so they have been outside a few times now.
Today Clare and Eryn came for a visit. 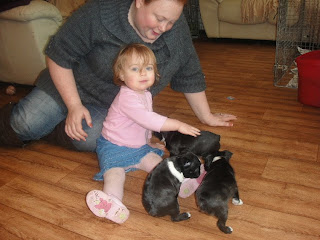 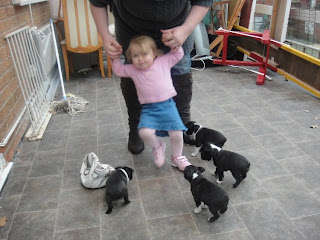 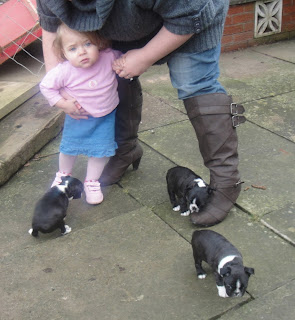 I have been quite ill with flu so haven't updated the blog for a few days. The puppies have now moved down stairs into a pen in the living room where they can get used to household noises and meet the other dogs.
They have started on solid food but are not eating a huge amount as Daisy is still feeding them quite a lot. She seems to be managing 4 puppies better than 6. They like toddling round the living room and love to meet the other dogs, especially daddy Milo. He thinks they are great fun too.
Posted by Foxbriar No comments: