There was no puppy class but Lily won the post graduate class and Rosie came 3rd in the open class. The two girls then ran off for best puppy and Lily won. We didn't stay for the puppy group as I was feeling under the weather having had a really bad cold for a few days. 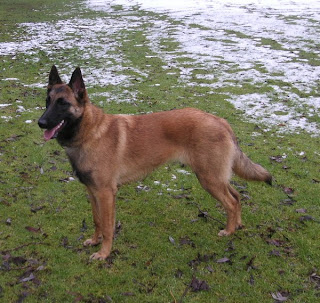 Dad also had a good day with Foxy winning her class and getting reserve best of breed.

On sunday I had planned to go to Tailwaggers agility show if I was feeling a bit better.
I had a bit of a surprise waking up to heavy snow as there was none when I went to bed but when I woke up there was a blizzard. After problems getting up the road I did make it to the show. It was a bit late starting and some people didn't get there but it was surprising how many people had braved the weather to get to the show. 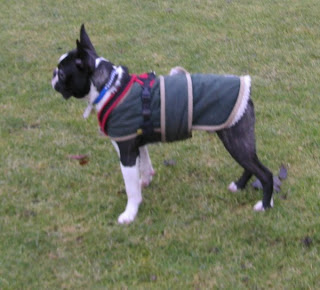 We missed our first class but arrived just as our agility class was about to start. Both Ruby and Saffy were entered. Ruby did a lovely clear round and came seventh. Saffy also did very well going where I said but just knocking a pole.

Last was the Triple A class which was a jumping class where the A frame was taken 3 times. Ruby did much better in this as she does like the contact equipment so she got another clear round and came 3rd. Saffy once again did really well but just knocked a pole. I was still really pleased with her as she went exactly where I said, didn't miss out any jumps and got all her contacts so maybe this year we will get a few more clear rounds. 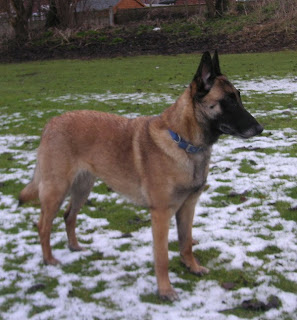 What a busy but successful week we have had this week.
Wednesday was Northiwich Canine Society's limited show and Milo, Lily and Rosie were all entered. Milo won first in both Minor Puppy Dog and Special Yearling Utility. 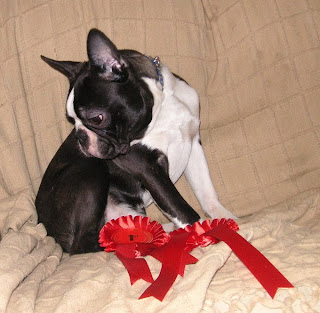 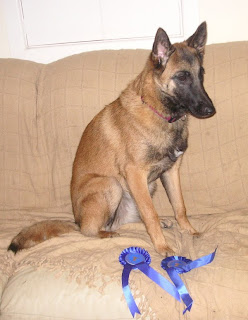 Then on Friday it was the Begin to Win club competition for beginner dogs. I entered Daisy for the first time and she was absolutely wonderful getting first in Small-Medium agility and being beaten into second place in Small-Medium jumping by only 2 tenths of a second. What is really good is that she is really starting to listen to me rather than just running around the course on her own. She is a dog that does think she knows best and often doesn't see why she should do what I want. Bostons are great fun to live with but Malinois are much easier to train. 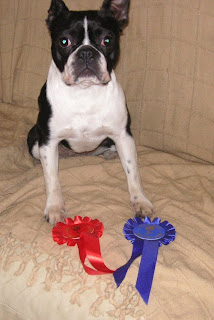 After the competition had finished I took Lily in and had a play with her around the equipment. She really blasts through the tunnels now and comes out for her toy. I put some jumps down to the very lowest height and practiced sending her over them and calling her over them. She had a lovely time doing this. I think she is going to be much faster than her mum but hopefully she will have her mums sensitivity so won't go galloping through the jumps sending poles flying like Saffy does.

Ruby and Saffy competed at the gundog agility competition this weekend. I know they are not gundogs but they also let non gundogs in too. Ruby got two clear rounds and the only times she didn't go clear were down to me either losing my way or dithering about which way to go.

And now for the really AMAZING news. SAFFY GOT A CLEAR ROUND!! for only the third time ever in her life and the first time in competition. And not only that she came Third in the Anything But a Gundog class beating Ruby into fourth place! I always knew she would do it one day. 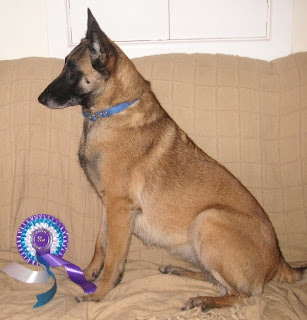 Today we went to Newark & District Dog Show with Rosie and Lily and Milo. Mum also came with Foxy and Shana the pyrenean Sheepdogs. It was very noisy at the show with lots of dogs and people coming and going but Rosy and Lily took it all in their stride. Lily loves going to shows as there are so many people there who will talk to her.
This show had Malinois classes so it was nice to go up against other dogs of the same breed. Lily did very well and came second and Rosie came fourth.
Unfortunately we missed Milo's class as the show organisers didn't have a ring allocated for it and didn't seem to know when it would be and then when I went along after the Malinois classes I was told that the Utility class had just finished. I have no idea why in a show with over 200 classes the two I am entered in are on at the same time.
Milo didn't mmind and enjoyed his day out. All the dogs had a lovely run together on the showground afterwards.
Posted by Foxbriar No comments: 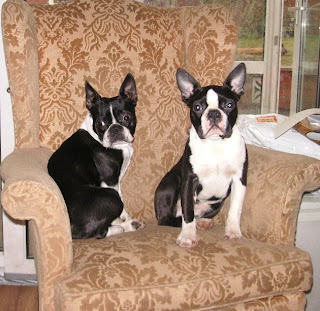 Milo is 6 months old today. He is nearly as big as Daisy now. and turning into a very handsome boy.


Daisy Milo and Lily are best of friends. I am sure Lily thinks she is a Boston Terrier as she does spend a lot of time playing with them 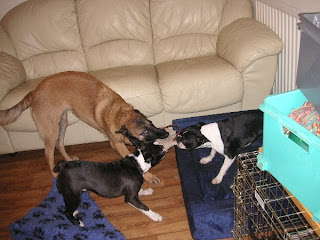