Saturday was the Agility Addicts January Show. Saffy was just entered in the Odds and bods class where she can do a lower height as it was her first show. She did very well to start with going exactly where I said until we got to the seesaw, when she shot off the end into space. this startled her a bit but she settled down after that and did the next few jumps Ok, then she did the A Frame and while she was up there spotted the tunnel and raced over to that, then I got her back and we finished the last couple of jumps correctly.

Saffy is very fast and once I get the steering sorted out we should do very well, but it is surprisingly hard to run her as she is so different from Ruby, who is very good at going exactly where I say. Ruby is also slower so I don't need to think as fast

I remembered to bring my camera with me today. unfortunately there was no one around to record Saffy's run or Ruby's agility run but I did get Ruby's jumping run recorded. She got a clear round in her jumping and also in her agility. Unfortunately we had to leave after our agility run so I don't know if we got a place, but ruby ran really well and it seemed fast. She always runs a lot faster in Agility than jumping as she loves contacts.
Posted by Foxbriar No comments:

Tonight was the monthly competition night at Digit Agility Club.
I took both Saffy and Ruby to compete and Daisy came along to meet everyone and to socialise. Everyone was rather surprised by my new puppy but they all thought she was very sweet and she made lots of new friends.
I entered the dogs in both the agility and jumping competition. Ruby did very well with a clear round in the jumping and second place in the agility.
Saffy had a really good time but was eliminated.
She got really over excited when she saw the equipment and she did the first couple of jumps nicely then she spotted the A frame which is her current favourite and took off and did that, then she saw the tunnel so she did that a couple of times, and then I managed to stop her. We did a couple more jumps correctly and then went out.
She did pretty much the same in the jumping too so I think I have got a fair amount of work to do getting her going where I say.
Posted by Foxbriar No comments:

I spring cleaned the conservatory today. I thought it looked great, no bits of chewed up toys on the freshly hoovered floor. Saffy and Daisy Obviously didn't agree though. I left them outside while I was busy upstairs and came down to find an uprooted plant in the middle of the floor and mud everywhere. Judging by the mud on Saffys paws and nose I think she was probably the ring leader, but Daisy doesn't usually need much persuading to join in with her mischief.
A sense of humour is essential if you have animals. And it is best not to be too houseproud either. 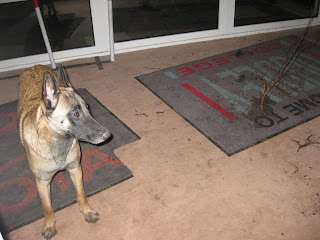 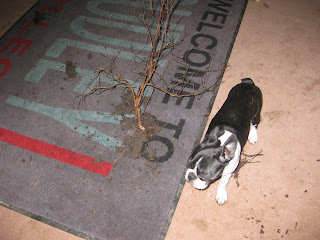 I managed to get some video of Ruby putting her toys in the box today. It is not easy to hold the camera while training. Ruby is getting pretty good at picking her toys up, but occasionally gets stuck on one toy and gets it out of the box again. I still think the dogs are easier to train than children though
Posted by Foxbriar No comments:

Saffy is the only dog I have that watches television. she often can be found standing in front of the TV. she likes wildlife programmes or anything with dogs in. She also likes childrens programmes. She also barks at suspicious looking men in police dramas.
Tonight I was watching Rusty, (Bonvivant Kalisto) winning the ABC final at Olympia on the computer when Saffy came over to see what I was watching. As you can see from the video she was really engrossed in it. I don't know if she recognised that Rusty was another Malinois but she was certainly glued to the screen.

She also watchd Ruby the kelpie that came second and deifinitely had something to say to her. Whether she was Cheering Ruby on or telling her to slow down I don't know. Saffy may have thought she knew Ruby as Ruby was bred by our friend Ann and Saffy has some good Kelpie friends.

.
Daisy and Saffy are still very good friends. This morning they seem to have solved the problem of the difference in size quite effectively. They are obviously feeling very lively.
Ruby however doesn't seem to appreciate having her sleep disturbed and pops out to tell the kids to tone it down a bit.
Posted by Foxbriar No comments:

This morning Saffy and I met up with a lady who had adopted what she thought was a German Shepherd from a local dog rescue. The dog is actually a Malinois cross GSD and looks very like a Malinois. 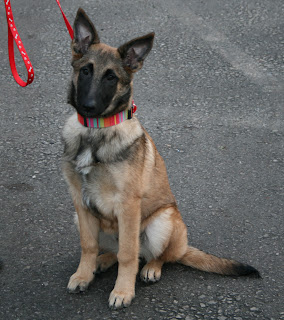 Saffy and Rosie got on really well. They ran and ran having a lovely time playing in the woods. I did take my camera but most of the time they were running too fast for the photos to come out. They did stop for a drink in a muddy puddle for a few seconds and then they were off again. 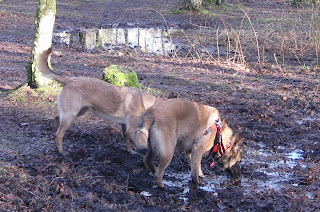 This afternoon the girls came over bringing William. Ruby was rather fascinated by one of Williams toys and when he left it unattended on the floor took her chance to have a quick go with it.

At the obedience show the other day there were some boomer balls on sale. I have seen these hard plastic balls on sale before and wondered if Ruby would like them. She loves her footballs but is very hard on them and can puncture a cheap one in a matter of seconds. Luckily Tristan does some football coaching and gives us all the footballs that the team has finished with. The we have several flat footballs lying about the house and garden. Ruby also buries them in the garden! 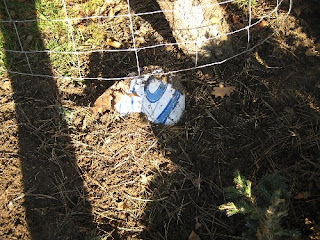 I wasn't sure if Ruby would like hard plastic balls as much as a real football but as you can see from the video both Ruby and Saffy think they are great fun. Unfortunately I can only let them play for a short while as I don't want the neighbours complaining. Luckily I bought two balls so both Ruby and Saffy have one each.

I took Saffy and Daisy up to ring craft tonight. Saffy hasn't been since the middle of last year and hasn't been to a breed show since last August . I have just sent in our Crufts entry so thought maybe I should get some practice.

It was the first time Daisy had been to Ringcraft although I have practiced standing with her. She loved being on the table as she could reach the judge to lick him. he wasn't really able to see her teeth though as she was wriggling around too much. I will need to practise moving her as at first I was going far too quickly, being used to a bigger dog. Daisy didn't mind and galloped happily along the mat, but I had to slow down quite a lot to get a nice trot. Standing in the line was great fun too as Daisy loves other dogs. First we stood next to a Mastiff and Daisy thought he was absolutely wonderful. Even though she was only about the size of his paw she was not at all worried by him and kept licking his face. I will have to bring my camer next time to take a some pictures. 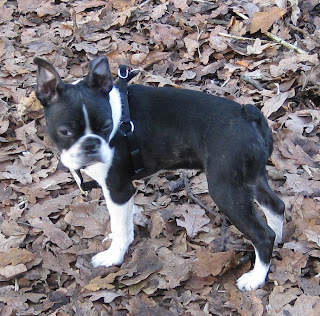 Saffy seemed to enjoy it too. Mum was there with Sharna so they both wanted to play more than stand looking pretty but Saffy did stand nicely for the judge and let him see her teeth. I did get into trouble for not listening to the judge and going up and down the mat twice instead of once so maybe I need the practice too.
Posted by Foxbriar No comments:

today was Robins birthday so Claire, Catherine Ashleigh and William came to visit. Daisy loves William and couldn't wait to say hello. Unfortunately William needed something to eat first.Daisy is getting bigger but still cannot quite jump up onto the settee. I don't think it will be long though.


Ruby is not sure about the baby but the did want to see what he was getting to eat. He didn't leave any for her though


Posted by Foxbriar No comments:

We went to Wilmslow Agility show today. This was only Ruby's second KC agility show. In our first run Grade 1+2 Agility Ruby ran clear but the clock didn't stop so we had to run again for time. We absolutely belted round the second time and I think Ruby was faster. To my amazement we were placed 7th in this class out of nearly 100 dogs.

We then had a wait for our second class combined 1+2 agility so I took Ruby and Saffy for a long walk to test out the new harnesses I bought them.
After lunch we did the second course and again Ruby jumped clear but we weren't quite fast enough to get a place.

Our third run was in grade 1+2 jumping but unfortunately I got completely lost on the course so we got eliminated. Ruby jumped exactly where I told her to, I just need to learn to remember the courses.

We had a lovely day. Ruby coped really well with the indoor show and even made friends with a Collie. Saffy had a lovely time talking to lots of dogs, We also practised sitting quietly and not screaming at fast running small dogs! She is getting much better at this now. Saffy will be old enough to compete in another month and I have entered her at an Agility Addicts show at the end of February. She really loves agility so I am sure she will enjoy it.
Posted by Foxbriar No comments:

Still snowy and very cold. I can't remember having such a long period of frost for several years. The dogs are staying lovely and clean. No muddy pawmarks. 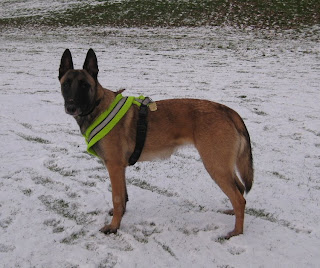 Saffy posing in her reflective harness. I have been asked several times if she is a guide dog when she is wearing it! Obviously she isn't and I would not trust Saffy to guide me anywhere as if she saw a cat she would be off. 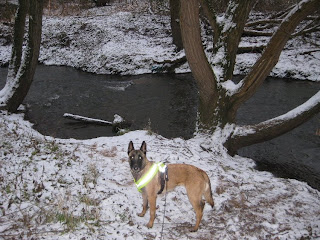 
we woke up to white world this morning. All the Malinois seemed to like the snow but Daisy is not impressed. The snow is almost up to her stomach.
The dogs had a lovely walk and then Saffy and Ruby spent ages running about in the garden.
Posted by Foxbriar No comments: