We Went to the Gundog agility show today. This was Saffy's first attempt at an agility show. She was entered in one a couple of weeks ago but we missed it because the van wouldn't start.

The video shows Saffy's first run which was a steeplechase course. She did fairly well. She was a bit put off by people standing in the top corner and unfortunately she did run off course to go through the soft tunnel, but she definitely enjoyed herself.
Ruby got a clear round but wasn't fast enough to get a place. She hurt her foot earlier in the week and I thought it was better but it became apparent later on that it is still bothering her.
Saffy did fairly well in both her agility and jumping rounds but didn't get any clear rounds. She had a lot of fun though and that is the most important thing .
Posted by Foxbriar No comments:

We have been in the new house for 6 months now and have settled in very well. We have found some lovely walks which the dogs like very much. But for Ruby there has been something lacking. Sticks. When we used to walk through the woods there were always lots of sticks for her to play with and she permanently had one in her mouth. But here the walks are over playing fields and golf courses. Lots of space to run but distinctly lacking in sticks.

This morning however walking across the golf course I noticed a big pile of logs, tree trunks and branches. The golf course keepers had obviously had a tidy up and done some pruning. Ruby saw them and dropped the football she was carrying and fell squealing onto the biggest tree trunk in the pile. She had a huge grin on her face and she tried to work out how to pick it up.

I let her play with it for a little while and then told her that I wasn't going to stay there all day just so she could play and told her to pick a stick which was a more manageable size. She eventually picked one that she could carry and agreed to come home with me and trotted off happily with her trophy. Favourite football cast aside and forgotten. Left for mum to carry home.

I didn't have the camera with me but Ruby was quite happy to take her stick for a walk up the road to show off her stick carrying skills so I could video her. She will carry her sticks for miles. They are usually at least 6 feet long and I have weighed some of them and they weigh anything up to 15-20lbs. Ruby only weighs 44lbs so it is an imense weight for her to carry. She is really good at allowing for the length of the stick when navigating round obstacles and goes up to narrow spaces very carefully so she doesn't get bumped if her stick is too long.
When we got home we encountered another problem as the gate into the back garden is too narrow to get the stick through. After lots of squealing, tugging, digging etc I took pity on her and stopped laughing and carried the stick into the garden for her. It is only a short video but Ruby spent at least 5 minutes trying to get her stick through the gate and would have carried on for a much longer . She never gives up where sticks are concerned.
Ruby now brings a new stick home each time we go for a walk and is getting quite a decent collection together to replace the one I got rid of when we moved. I wonder if the golf people are puzzled by their shrinking pile of sticks? 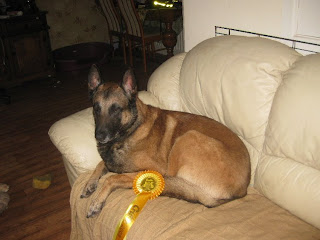 Casey and I went to Crufts today. Saffy should have come too but the van is still being tested to see if the problem is resolved. I didn't want to risk getting stranded in Birmingham with dad and 7 dogs so we decided it would be safer to go in Dads car. This meant that there was only room for one Malinois. As Saffy goes to lots of different shows I decided that Casey could come to Crufts. He does love it.

We had a couple of delays on the way down which meant that I only just got into the building before the judging started. Casey being a veteran now was first in the ring. so it was a bit of a panic getting in there. In spite of this he showed really well and managed a creditable third which qualifies him for next year.
Casey had a wonderful time there talking to all the nice girls and getting cuddles from loads of people.
Dad did very well too with his dogs either winning their classes or getting a second. It was nice to catch up with friends I haven't seen for ages.
Posted by Foxbriar No comments: 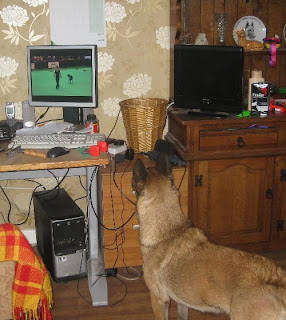 Crufts is in full swing now. The coverage this year is on the internet rather than the television and it is much better as it goes on all day and then you can watch videos of it all night. Both me and saffy have been glued to it. Saffy does prefer the agility but I put the obedience on for her too in the hope she might learn something! 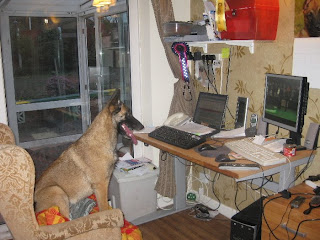 I have been working on Daisy's retrieve this week. it is coming on really well. She can now lift the dumbell from the ground and I am clicking her for bringing it to me. She did start running off with it so if she does that she doesn't get a click. The breed has a reputation for being stubborn but I have not found Daisy stubborn at all. She loves working with the clicker and as well as the retrieve she can sit, down, stand, roll over, bend (playbow) and twist to the right and left. I am sure there are other things too. not bad for a five month old pup.
I am also doing some agility training with her and she is getting the hang of her contacts. She can run along a plank of wood and stop at the end two on and two off. I am also having a go at teaching weaves using the 2x2 method and that seems to be going quite well too.
Posted by Foxbriar No comments:

Still having problems with the Van. I missed the Agility Addicts show yesterday as it wouldn't start, but did get it going to go to Reedyford Obedience show today. 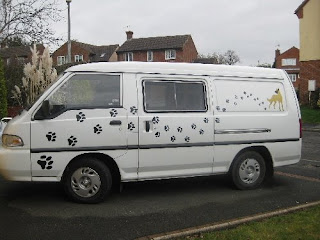 I got a very nice surprise when I got there as there were some uncollected rosettes from the Lune Valley show a couple of weeks ago and I had one for Ruby. She didn't get a place but she was awarded best any other variety. I was so pleased to have her first ever obedience rosette.

Things didn't go quite so well today. Ruby was drawn in beginners. She needs time to settle down before she works. She did some heelwork but not with much enthusiasm and she didn't want to play either. She did her stays later on.

Saffy did lovely heelwork on lead and a good retieve and recall but then a crowd of people and dogs arrived outside the ring just as we were about to do heel free and she couldn't concentrate so we had to abandon it. She also did her stays though . Both dogs did nice training rounds in their Novice rounds.

Daisy came along too and had a lovely time talking to all the people. I think her aim is to get a cuddle off every person in the place.
Posted by Foxbriar No comments: