There was a hip and eye clinic run at a local vets today so I booked Saffy and Daisy in for eye tests and also booked Saffy to have her hips scored.
Both Daisy and Saffy's eye tests were clear ad SAffys hips look good. The BVA are taking up to 6 weeks to score the hips so will probably not get the result until after Christmas. There should be no problem with her being able to do agility which is the main reason I wanted them scored.
I was able to stay with Saffy all the time while the xray was done. She was quite funny after she had had the sedative. First of all her hind legs started to go and he rear end got closer and closer to the floor until she was sitting. I tried to get her to lie down but she wouldn't, just sat there with her tongue out and her eyes half closed. Then the front legs started to go, sliding out at right angles to each other, until at last her chin was resting on the floor, and with her front legs spread-eagled, she looked just like a tiger skin rug!
Afterwards the vet showed me the xrays and explained what the BVA look at. he said Saffys hips look pretty good and thought they would be about 5:4 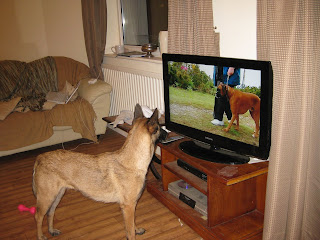 We went to another Agility Addicts show today. I took Both Ruby and Dora again. It was bitterly cold all day and the fog didn't clear all day. In spite of the bad weather we had a very enjoyable day. Dora ran first in the Odds and Bods agility class. This is a class where the dogs can do lower jumps. this time I put Dora in over the small height jumps and she managed them much better. She does love agility but as she has arthritis I don't like her jumping very much. Unfortunately we got eliminated as I went the wrong way.
Next it was Ruby's turn. The same course but with full height jumps. This time I went the right way and Ruby ran very well. She ended up placed 8th. Next we did the jumping class and this time I ran well with Dora and for the first time we didn't get eliminated, unfortunately I then got lost running Ruby. I will need to wok on memorising courses I think.
Posted by Foxbriar No comments:

Saffy and Daisy settling down for a snooze 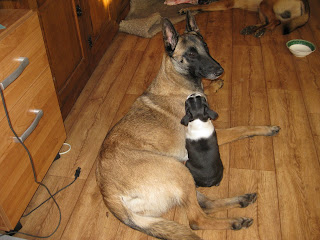 Not comfortable yet, the floor is a bit hard.. 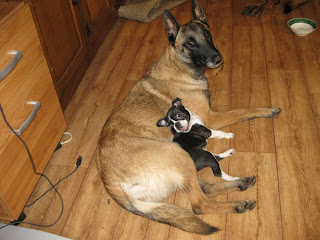 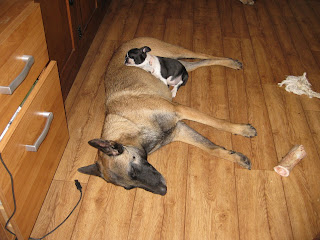 Just get a bit more comfortable 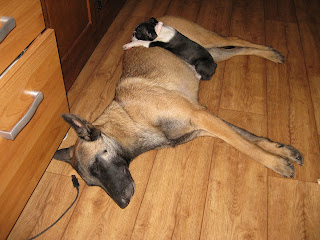 These Malinois are quite useful to have around sometimes! 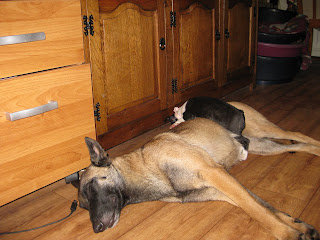 A frosty morning walk. first across the golf course 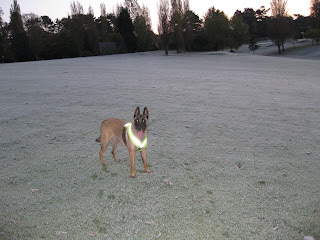 then through the woods. What lives down this big hole? 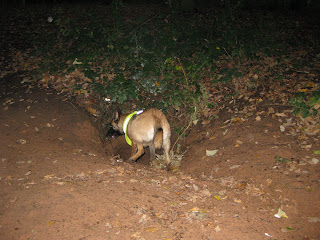 then down the bank and across the fields 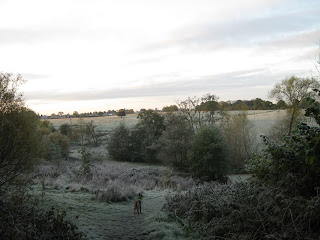 a quick dip and then home 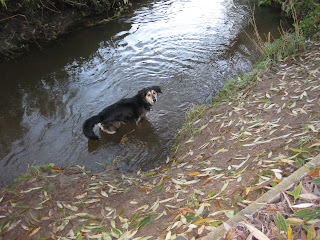 
Malinois are sometimes called Maligators. Maybe this video shows why.
Saffy standing with her back legs on the settee snapping her jaws at every one. the noise is her teeth snapping together. She is not trying to bite she just clacking her jaws, but she does remind me of the monster from Alien!
Posted by Foxbriar No comments:

We took Daisy over to mums again today and I remembered to take my camera with me this time. Daisy had a great time playing with the big dogs. Shes not scared of them at all. 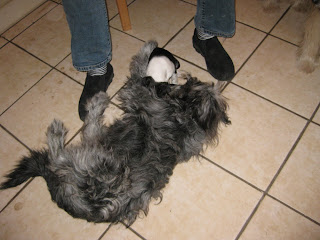 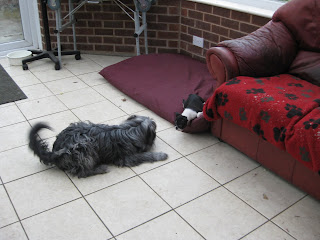 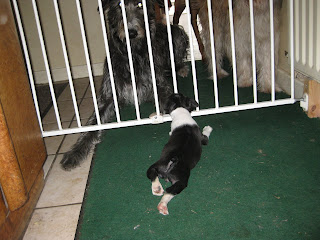 I took Ruby and Saffy on an Agility training day organised by the Working Belgian Shepherd Dog Society. The trainers were Andy and Helen Brown.

It was a very interesting day and I picked up lots of handling tips. Saffy met a lovely Groenendael called Dipti who just wanted to play with her and they had a lovely time bouncing about.

Saffy was very well behaved in the morning with Andy doing jumps and tunnels , but when I brought her in to do the Agility training in the afternoon with Helen she got rather over excited and when I left her in a wait at the start she ran off over the dogwalk, then through the tunnel and back over the dog walk then dashed to the top of the A frame and stayed up there surveying the scene.

I was very pleased with how Ruby managed the contact equipment as it was a lot slippier than she is used to. at first she was a bit unsure on the A frame but soon learned to manage it. Ruby had a major phobia about the dog walk in the past and was very worried about slipping on contact equipment but she managed this strange dog walk very well. Helen encouraged my to talk to Ruby while she is doing the dog walk. i didn't realise it but I don't speak to her while she is doing it, but Helen said she is much happier if I talk to her in a happy voice.
Posted by Foxbriar No comments:

Daisy has settled in very well. Last week I was a bit worried about Saffy's reaction to having a tiny dog running around the house as she seemed convinced that Daisy was a cat, or rabbit. Something to chase. Saffy was really fixed on Daisy to the extent that she didn't even notice food or toys, she just wanted to chase the puppy. Things thankfully have changed very quickly and now Saffy and Daisy are the best of friends. They would play all day long. Saffy is very gentle with Daisy, lying down so Daisy can climb all over her.
Sometimes Saffy has trodden on Daisy by accident and then Daisy really tells her off. She is quite a tough little dog. 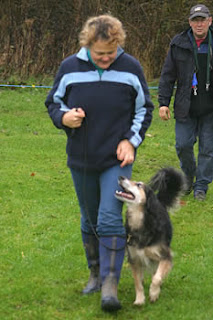 Today was the inter club competition between Danesford, Lichfield, Rugby and Coventry dog training clubs. I was competing with Dora in the beginners for Danesford. We went first in our class. Dora did some smashing heelwork both on and off lead but unfortunately for some reason dropped the dumbell on the retrieve. this cost us 3 points. We would have won if we had done the retrieve, but as it was we came second. After all the classes we had a very nice lunch and then a quiz. It was a very enjoyable day. Unfortunately Danesford did not do too well in some of the other classes so we came fourth overall but we still had a good day
Saffy came with me too just for the day out and she had a lovely time playing with some of the other dogs.
Posted by Foxbriar No comments: 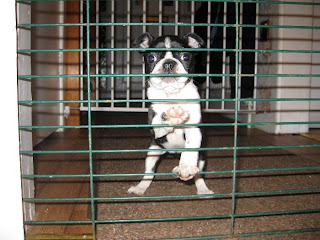 Daisy does not like being shut apart from the big dogs but while she is so small it is safer. 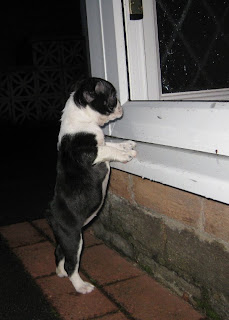 Can someone give me a leg up? its cold out here! 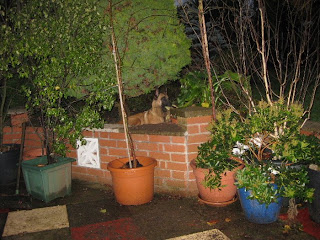 Ruby is having a phantom pregnancy and has dug herself a nest in the garden. She is not however interested in mothering that strange black and white puppy
Posted by Foxbriar No comments:

We took Daisy to mums to introduce her to the Pyreneans this morning. She waked into mums as if she owned the place. Foxy raced up to Daisy which did startle Daisy a bit but she soon recovered. Daisy decided that Foxy looked like fun to play with and proceeded to chase her around the house, Foxy is nearly full grown now and it was quite funny to see her being chased by such a tiny puppy. 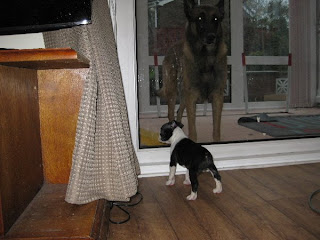 Daisy then went to say hello to Grandad. He was very taken with her. He always had small dogs. 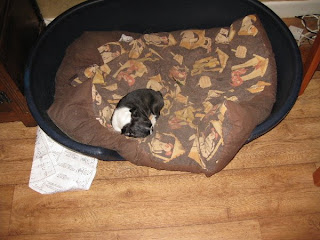 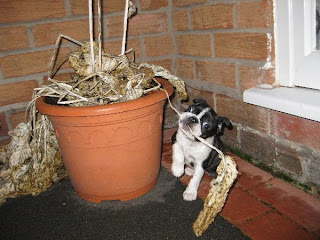 We have a new member of the family. We have been joined by Daisy the Boston Terrier. 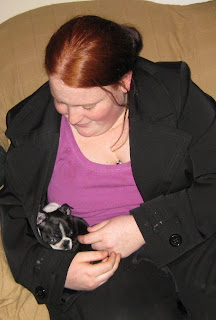 I just happened to see a litter advertised near me so rang up to ask about them. There was just one bitch left so we went to take a look at her. The breeder handed my the pedigree to look at, and her registered name was Crazy Daisy. Years ago when I first thought about doing obedience with my crossbreed dog I registered her with the kennel Club as Crazy Daisy. When I saw the name I knew she had to come home with me. She has settled in very well. She is not scared of anything.
Daisy only weighs 2 lb at the moment so I have to watch to make sure the Malinois don't tread on her, but she is not worried about these huge dogs at all. 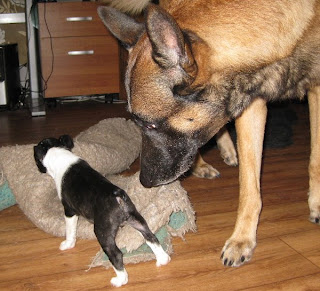 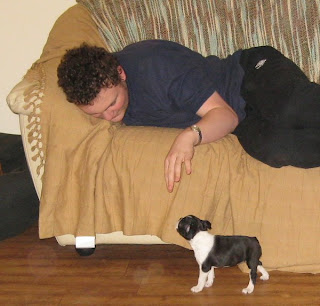 We went to Agility addicts Halloween agility show today. I entered Ruby an the elementary class and Dora in the odds and bods class. This is class for dogs who can't jump the normal heights and has lower jumps.

Ruby ran in the elementary agility first and went clear.
Then Dora ran in her class but missed one jump so we got eliminated. Dora really enjoyed it though. it is the first time I have taken her to an agility show as she has arthritis in her elbows and shoulders so I don't ask her to jump much but she was fine over the lower height.

We did a special class called a Catherine Wheel next. Dora went clear in her class but I totally got lost running Ruby so we got eliminated. Ruby jumped exactly where I asked her to but I pointed to the wrong jump.

After this some of the presentations were done and much to my amazement Ruby was eighth in her agilty class. Her first ever place in an agility show.

Finally we did the elementary jumping and again Ruby jumped another clear round but didn't get a place in this one. Dora once again managed to miss a jump, but she had a great time so that was the important thing.
Posted by Foxbriar No comments: