At last, a dog related update We went to Lune Valley Obedience show today. The first show we have been to for ages. i missed a couple due to the move and then before that the girls were in season.

I was drawn first with Dora in Beginners. The break had obviously done her good as she worked very well. She was pleased to be back in the ring and bounced along happily. She only lost 4 marks, 1.5 HOL, 2 HF. .5 Recall and none for her Retrieve.

Next I took Saffy into the ring. I decided I would start off competing and if she lost concentration would turn it into a training round. this is the first time I have tried to actually compete with saffy apart from in companion shows. Saffy worked brilliantly. Even ignoring the little bichon in the next ring. Her heelwork was beautiful both on and off lead. We need a little more work on her left turns but they were still pretty good. In the end we lost 5.5 marks. 2 HOl, 3 HF .5 Retrieve and full marks for her recall. I was so pleased with her.

Unfortunately to get a place we also had to do stays and Saffy has never actually been in the stay ring at a show and I have not spent as much time as I should training stays with all the otehr things we do, but I decided to take her in the ring ans see what happened. She lasted for 30 seconds in each stay then came to me to see why I was just standing there and to see if there was any food in the offing. thankfully Dora stayed where she was even though Saffy moved.

In the end Dora was placed Fifth. Saffy would have been sixth if she had done the stays. Not bad in a class of over 40 dogs. I think I must do a bit more training. 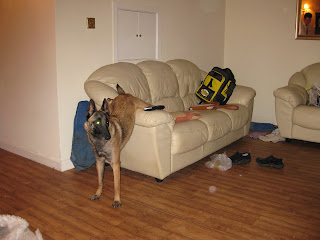 The Picture shows hanging about on the settee. She often stands like this. She is a very strange dog sometimes!
Posted by Foxbriar No comments:

it is now 2 weeks since we moved. things are a lot more normal. I now have internet access so have deleted the 700 plus spam emails ans waded my way through the rest. I have taken lots of photos of the house in various stages of chaos which will get added to the blog once Catherine returns my camera as she borrowed it to take pictures of William. 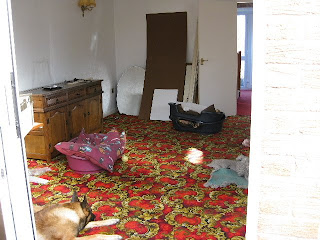 This is a picture of the living room before the new vinyl flooring was laid. The carpet was just too bright to live with for long. I decided to go for a vinyl flooring as it is much easier to clean than carpet, and much easier to lay and less slippy than ceramic tiles or laminate flooring. As the floor boards were very uneven I had to cover the whole floor with hardboard first which was a major undertaking but will be worth it in the long run. Ruby has a smooth floor phobia and once the hardboard was down she wouldn't come inside so spent the night in the conservatory. Thankfully the vinyl was laid the next day and has a nonslip finish so she can walk on it ok. 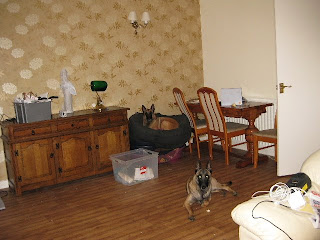 this is a picture of the same corner of the living room with the new flooring down. The wallpaper has changed too as after the floor was laid I pulled at a bit of loose paper, and then a bit more and then thought, Oh it will only take a couple of hours to strip this off....

Actually it took until nearly midnight, then another day to wash the walls down to get off the little bits of paper then another day to paint and wallpaper. As if I hadn't got enough to do unpacking boxes. Still it does look hugely better than the dirty white anaglypta that it replaced.

Ruby can be seen in the photo in her high rise bed. I stack the dog beds up during the day so they don't cover the whole floor and Ruby likes to sleep at the top of the pile.
Posted by Foxbriar No comments:

We have moved. Everything is on total chaos. The kitchen and bathroom are not finished yet so we couldn't put any of the kitchen stuff in the kitchen. We have the washer, fridge and freezer all in the living room.  Covered in boxes.
The kitchen fitter has his tools and bits of the kitchen in the garage so all the stuff out of the garage had to be put outside or in the conservatory.
The living room furniture is also in the conservatory.  the bedrooms are FULL of boxes. and I can't find anything.
I did manage to get my bed set up so  I had somewhere to sleep. Robin had to sleep on a mattress on the floor.
I collected the dogs from Ann's where they had been all day and brought them home. They seem less than impressed by the new arrangements.
The first thing casey did was run into the Patio doors which were closed. The dogs are not used to large panes of glass.
Saffy has also run into them several times now. She does seem a but slow to learn.
When I open the doors for the dogs they don't come straight through, they sit there and reach out with their feet to see if the door is really open, they don't seem at all sure abut the sliding door.
In the house they are following me round everywhere. I am sure they are waiting for me to take them home.
I put the dog beds out last night but they did not beleive that I actually meant them to sleep in this house. In the end they slept with me on my bed or on the floor in what little space there was in the bedroom.
Today hopefully the kitchen and Bathroom will be finished and we can start getting things put away. Normality is still a long long way away.
Posted by Foxbriar No comments: