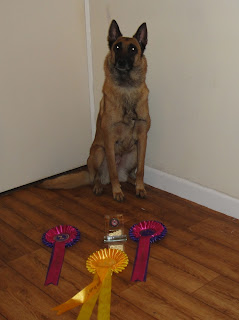 So many people have comented on the fact that I have not updated my blog for such a long time and asked when I would start it again that I thought I had better start updating it more regularly.
We have had a very good year competing at agility. We won into Grade three at the beginning of the season .
Lily has only been competing for a year but is doing very well. Regularly getting placed which is quite an acheivement considering the large grade 3 classes usually have nearly 200 dogs in them.
The photo is Lily with the rosettes and trophy she won at Wilmslow show last weekend where she won a 3rd and 4th in agility and a 14th in jumping
Milo also started competing last year and has had several places in grade 3. Daisy is also doing well with several places in grade three culminating in winning into grade 4 at the end of the season last year.
Ruby has now retired from agility due to having a fall from the dog walk which reawakened her fear of the contact equipment. I am finding running 3 dogs is plenty, Running 4 was getting to be hard work.
Posted by Foxbriar